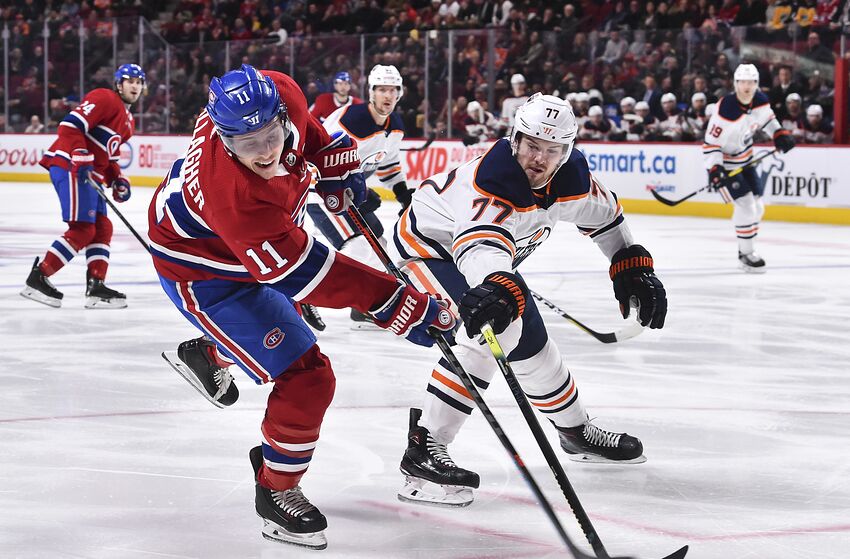 MONTREAL, QC - JANUARY 09: Oscar Klefbom #77 of the Edmonton Oilers tries to block a shot by Brendan Gallagher #11 of the Montreal Canadiens during the second period at the Bell Centre on January 9, 2020 in Montreal, Canada. (Photo by Minas Panagiotakis/Getty Images)

Brendan Gallagher is experiencing headaches after returning to the Montreal Canadiens, and he should be shut down if that’s what it takes for him to heal.

The Montreal Canadiens losing Brendan Gallagher when they did is the giant snowball rolling down the mountain picking up another 20 kilometres of speed. The awkward trifecta collision between himself Jordan Staal and Ben Chiarot took the 27-year-old out of the lineup for four games. In those four games, the Habs added Marco Scandella and Ilya Kovalchuk but continued to lose.

Concussions are difficult to track, and they impact people differently. Gallagher was back in the lineup for the Habs’ most recent game against the Edmonton Oilers. He saw 17 minutes of ice time (about 14:20 at 5v5), got four shots on net and got back on track in being a driver on the top line along with Phillip Danult and Tomas Tatar.

Unfortunately, the return of Brendan Gallager wasn’t enough to stop the bleeding of the Montreal Canadiens season. To make matters worse, it looks as if the team will be without Gallagher once again.

Jeff Petry and Brendan Gallagher were absent from practice this morning, which the team dubbed as therapy days. After practice, Claude Julien told media that Gallagher is experiencing headaches, and the medical team is working to figure out whether it’s related to the concussion or if he’s getting sick.

The timeline of this whole circumstance points towards them being concussion-related, but we’ll wait until there is an official statement from the Montreal Canadiens. This doesn’t change a decision that must be made by the team, though. Whether Gallagher is experiencing concussion symptoms again or it’s a virus, the Habs should be shutting him down for the near future.

Montreal has lost eight games in a row for the second time this season, only adding two points thanks to the defeats being in overtime. The Habs have been surpassed by every Atlantic Division team except for the Ottawa Senators and Detroit Red Wings (who they’ve lost to twice). On a grander scheme, the team sits sixth last in the league.

It would take a miracle run from Montreal and a colossal collapse from a number of teams to get them back in the running. And if that continues to be the case, there’s no point in rushing Brendan Gallagher.

You can’t tell players to stop playing and to give up. However, the management office should be keeping the long-term perspective of a lot of things, including Gallagher’s health, in mind here. Give him the time he needs to heal, and the same goes for the rest of the players who are still on the sidelines.

Nothing is set in stone, but it looks as if the Montreal Canadiens are getting their third season in-a-row without the playoffs. There’s no point of rushing anyone back.